The end of the semester is hitting me hard, and then I’ll undertake a 10-state road trip with my older daughter. And these are big Western states. So my regular posts here will be on hiatus until July. In the meantime, I thought I’d share some photos of historical criminal justice practices. I’ll be posting those on Wednesdays until July.

Today I have some more photos of old jails. 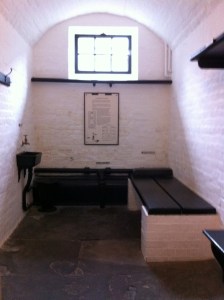 This is a military jail (or gaol, I guess) in Edinburgh, Scotland. 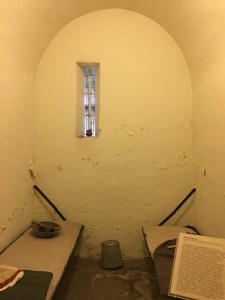 This jail cell is in Monterey, California. I think it’s interesting how closely it resembles the Scottish cell. 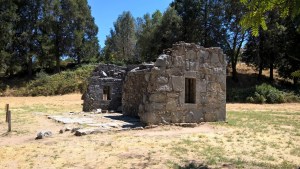 These are the ruins of the gold rush-era jail in Coloma, California. 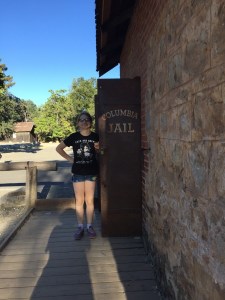 This gold rush jail is in better shape. It’s in Columbia, California. My younger daughter looks happy to be there, doesn’t she? 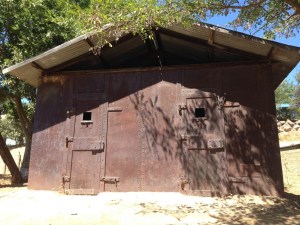 This is also from gold rush times, and it’s in Knights Ferry, California. Summer temps regularly get above 100F there–imagine what it would be like locked inside those metal walls.

The end of the semester is hitting me hard, and then I’ll undertake a 10-state road trip with my older daughter. And these are big Western states. So my regular posts here will be on hiatus until July. In the meantime, I thought I’d share some photos of historical criminal justice practices. I’ll be posting those on Wednesdays until July.

We’ll begin today with some photos of old jails, which were often built into city walls. That made sense, since the walls were already fortified and guarded. Jails were intended to hold prisoners for only short lengths of time, usually while they were waiting for their trials. This remains one of the primary purposes of American jails (as opposed to prisons, which hold convicted felons). 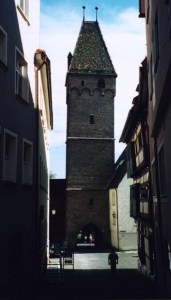 This jail is in a tower atop the city wall in Ulm, Germany. 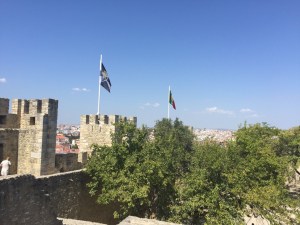 One of those flags is flying over a cell in the castle wall in Lisbon, Portugal. 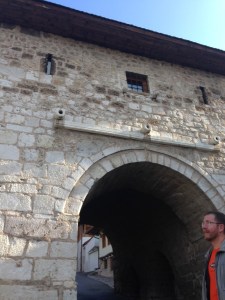 This cell was in the old city wall in Sarajevo, Bosnia & Herzegovina. 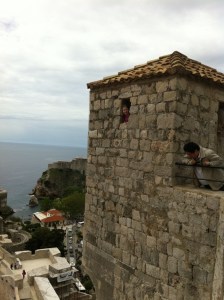 And this one (which contains my daughter in the photo) is in beautiful Dubrovnik, Croatia. 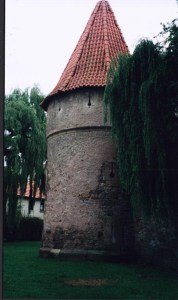 Finally, another German cell, in Rothenburg.

Officer Carson smirked as she tightened the handcuffs. “How does it feel?” she asked.

“No, I’m the one feeling dandy, Johnson. I’ve been waiting a long time for this.”

Johnson raised his chin. “Yeah? Well, don’t get too excited. This thing is bullshit, and at worst, I’m gonna cop a plea. I ain’t gonna be spending much time in jail.”

Undaunted, Carson pushed him into the back of the patrol car. “Sure, Johnson. But you’ll be spending a good long time in prison.”

If I had a list of the most annoying things authors get wrong about criminal justice, confusing jails with prisons would be near the top. Yes, I know laypeople use the terms interchangeably. But a jail is actually a very different place than a prison, with different populations and different goals.

Jails (in some countries, spelled gaols) have been around for many hundreds of years. As was true in medieval England, the primary purpose of US jails is to hold pretrial detainees: people who have been accused of crimes and are awaiting trial. Some people who are awaiting trial are released on bail (a money deposit paid to ensure the defendant’s appearance at trial) or released on their own recognizance (with no guarantee except their promise to appear in court). But some can’t afford bail or, if they’re accused of very serious crimes or are flight risks, are denied bail altogether. Even though we’re supposed to presume them innocent, those people will sit in jail until their trial.

The second big group in jail are people who have been convicted of misdemeanors or minor felonies and who are serving sentences of less than a year. Unlike the pretrial detainees, the members of this group are no longer presumed innocent. And they’re being held as punishment rather than to ensure their appearance at trial.

Jails may also hold other people. These might include those who are suspected of being mentally ill and a danger to themselves or others and who are waiting to be transferred to a mental health facility. It might also include juvenile offenders, especially in sparsely populated areas where there is no juvenile hall, and sometimes also undocumented aliens awaiting hearings or deportation.

Jails are usually run by local law enforcement authorities. In California, for example, sheriffs’ departments often run the jails. Jail inmates are generally held in the city or county where the crime occurred. Jails may be very dangerous places, partly due to overcrowding but also because those detained for minor (usually nonviolent) crimes are often mixed with pretrial detainees who may be very violent indeed.

Prisons hold people who have been convicted of felonies and sentenced to longer than a year. These facilities are usually run by the state or federal government. A good number of US prisons are now run by private corporations (this is a fairly controversial practice).

There are a wide variety of security levels for prisons, ranging from honor farms and minimum security—where there’s usually no wall around the facility—to supermax prisons, in which inmates are essentially kept in solitary confinement for the length of their sentence. There are separate prisons for women and men. There are also specialized prisons available for inmates suffering from severe mental illnesses.

Scott Johnson may not spend much time in jail; if he has money, he can probably post bail fairly soon. But if the plea bargain doesn’t work and he’s ultimately convicted of something serious, he’ll end up housed in prison for a long time. Much to Officer Carson’s satisfaction.