Do you write paranormal or horror? Then today I have a plot bunny for you, courtesy of friends and my daughter. Let me preface this by saying that, like many attorneys, I enjoy considering legal hypotheticals. We can’t help it. Law school ruined us.

So my younger daughter recently sent me this text: 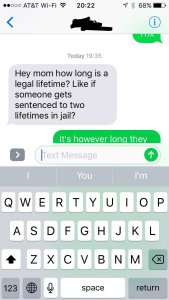 She was at a birthday party. I don’t even want to know how the subject came up. But I posted the text on Facebook, which led a couple of friends to make comments about zombies. And that leads to today’s plot bunny.

Suppose Alex is a zombie. And further suppose Alex  attacks Bob, a living human being, and kills him. And then, maybe after some time has passed and after Bob has begun his own zombification process, Alex eats Bob’s brainnnnns.

Assuming zombies are subject to criminal laws, can Alex be charged with two homicides?

Part of our answer will depend on an interpretation of the law. Homicide is generally defined as the unlawful taking of a human life. So are zombies human? If not, Alex can be charged with only one homicide, plus maybe desecration of a corpse. If zombies are human, another question arises. Does it violate double jeopardy to charge someone with killing a person and then destroying the zombie that person has become?

We could add some other twists as well. What if Alex kills Bob, abandons the corpse, returns before Bob has risen as a zombie, and eats his brainnnnns then? Would that still count?

And what defenses might Alex have? Can a zombie form mens rea?

One of my law profs once gave a lecture about how lawyers are vampires, but I think lawyers and zombies could be fun too. So please. Consider writing a zombie legal procedural novel?

One thought on “Zombies!”